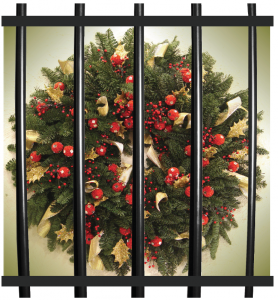 Last Christmas, we did not visit Asher. We see him just about every week, and we felt strongly that Christmas needed to be spent with our other children at home. Asher was knee-deep in ugly at the time and regularly told us that life at JCF wasn’t so bad. Everything from the food to the laundry was extolled and trotted out for us to admire. While I don’t believe for a minute that Asher genuinely wanted to spend Christmas locked in a small dormitory, I also don’t think he really wanted to be home.

This Christmas was different.

Asher is beginning to change. It is ever so gradual and the process is still two steps forward with one step back. But it is present and appears genuine.

We weren’t going to spend Christmas with him. We had a busy few days leading up to Christmas Eve and Christmas – both of which hold special meaning with traditions that pack those two days with yearly must-dos. But something began to shift for me when we visited Asher on the weekend before Christmas.

Our normal visitation is during the week. Joseph and I appreciate seeing Asher in his school environment rather than the weekends with other visitors and activities. The boys are kept busy, and when you visit, you simply join the group in whatever they are doing. During weekdays that means school or meals. It is much easier to have a conversation or assess how Asher is doing without the distraction of gym time, chores, or the schedule conflict of community service. However, that weekend was different because of the holiday schedule and our own plans. So, we asked Asher to put in a pass for us on Saturday. When we arrived, we were told the boys were in the gym for a special, surprise Christmas program.

The gym was decorated with festive artwork and several Christmas trees. And the volunteer ratio was through the roof. I quickly learned why. The program was sponsored and run by a local organization that is dedicated to meeting the spiritual needs of the boys and girls at JCF. YPF (Youth Prison Fellowship) coordinates volunteers from around the local area and provides non-denominational services on Sunday mornings and special worship and bible studies on some Tuesday evenings. They also connect convicted youth with clergy who are willing to visit and counsel them.

That day in the gym, I was seeing the near total roster of volunteers for YPF.

My heart was overwhelmed. As Joseph and I sat at the table with the boys from Asher’s dorm, we watched boys from 20 other tables sitting with their peers and taking in the sights. We sang Christmas carols and ate cookies with soda. Then, one by one, each church took a turn rotating around the tables and spending 10 minute sharing with the boys what Christmas, and specifically Jesus, meant to them. They gave the boys gifts and clapped them on the shoulder. They told them about the ways Christ cared for them, and encouraged them that they were not alone. One by one, over and over, we heard and saw the same expression of love on the faces of these volunteers.

It, quite literally, overwhelmed us.

Every time a group rotated, and we got a new church, the same mistake was made about our identity. “Thank you so much for having us,” they would share. “Oh, no we don’t work here. This is our son.” And then we would take a moment to share with them how much it meant to us to have them giving of their time and gifts to love these boys – the outcasts of our society. We told them how hard it was for us to be divided from the spiritual care of our son and that the service they were providing for us, and families like (or often so unlike) ours, was invaluable. And in those conversations our heart began to change and the plan started to form that would allow us to visit on Christmas day.

In the hub-bub of that Christmas program, there was merriment and excitement. The boys gratefully accepted presents given to them from congregations across our area. Everyone ate candy and relished the festive air. But Christmas day was quite different.

We were the only ones to visit in Asher’s dorm. There was a surprising quiet at JCF, and when we signed the register, I noted far fewer names than I expected. When I asked the boys how they were doing, one young man responded, “It’s just another day.” He’s 18 and already a cynic about family and celebration. This is his second term at JCF and his third Christmas away from family. But it wasn’t just him. All the boys were high-strung and irritable.

Christmas is sacred in our culture. Businesses normally open 24/7 are closed. Families that can’t abide one another still share a table. A sense of wonder and delight is tangible. But these boys, these forgotten boys, still young and impressionable and of an age when opening presents comes with its own giddiness, sat in their dorm with their staff workers and ate cold cereal. Some opened presents from family but others only received gifts from the state. One 14-year-old, young man showed me the 7-piece, children’s puzzle his mom purchased at the local thrift store.

I hate to be the bearer of bad news, but it is NOT, in and of itself, the thought that counts.

These boys long to be loved. They need to be shown that they are not forgotten. They need people to believe in them and rally around them and tell them they can do it! They need visitors. So, I’m glad that Joseph and I chose to sacrifice some of our family’s traditions to make the visit possible. It was inconvenient and difficult. But sharing with those boys that they were not alone was priceless.

May I challenge you? Please consider volunteering with a program that reaches out to incarcerated youth. These young men and women need to know that Christ sees them and loves them while they are inside those walls.